In just 1RU, MicroN offers a highly versatile signal interface that can be used in productions of every size and complexity. For the largest media networks built on MediorNet transport devices, MicroN can serve as a breakout box for a MetroN router and extend connectivity beyond the fiber I/Os to any type of video and audio I/O required. Or, MicroN can simply work with a MetroN router, with other MicroN units, or in a standalone point-to-point configuration to provide an economical solution for small- to medium-sized productions. And, like the other MediorNet devices, MicroN has powerful built-in signal processing features that eliminate the need for many external devices.

Because of the Micron’s versatility it is a suitable alternative to a Lawo V PRO 8. 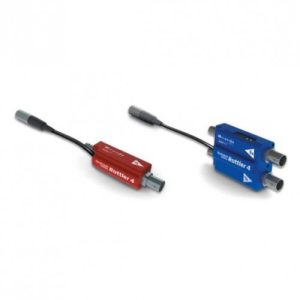 Plexsis provides transport of 8 SDI (HD, 3G and SD) signals over a single optical fibre, and up to 16 when linking two systems, the Plexsis is available in two configurations (8 channels on one direction or 4 in both directions), with each of these available in the high or low wavelength band. All SDI ports are fully re-clocked, meaning that jitter caused by long coaxial runs will not affect the maximum optical run length and vice versa.The front panel OLED screen displays optical power, SDI signal presence, temperature and system voltages, and alarms can be set up to trigger an audible tone or relay contact closure, giving peace of mind when it comes to detecting and resolving distance, grounding and interference issues. 4/4 x 3G-SDI over one fibre Automatic cable equalisation Multi-rate re-clocking with automatic rate detection Both AC and DC power inputs provides flexibility and power redundancy Supports SD, HD and 3G SDI Wide DC input range 9-36V Full colour front panel display Optical expansion port PRODUCT MANUAL
Read more 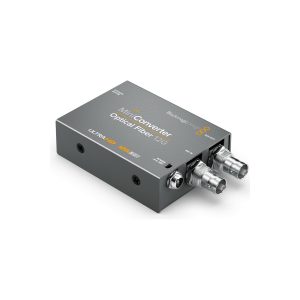 Blackmagic Design Mini Converter Optical Fibre 12G - Bi-Directional SDI to Optical Fibre Mini Converter Optical Fibre 12G converts SDI to optical fiber and optical fibre to SDI in both directions at the same time, you can even have different video standards going in each direction. The 12G‑SDI connections are multi rate, which makes it compatible with all SD, HD and Ultra HD formats and equipment up to 2160p60, including Level A and B devices. You can install any standard 3G, 6G or 12G‑SDI SFP optical fibre module so you can send SDI using the same low cost optical fiber cables that are commonly used for computer networks.
Read more 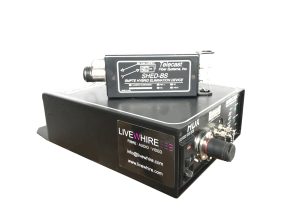 SHED stands for SMPTE Hybrid Elimination Device, and that is what it is. It is a small adapter that allows you to use ordinary single-mode optical fibre for your HD, 4K and slow-motion camera links and in your venue/facility infrastructure, and eliminate bulky hybrid wire/ fibre. SHED adapter shown with HDX camera power unit cables. Use two small adapters — one at your base station and one at your camera — and locally power your camera, or use the HDX unit to power the camera through the hybrid tail cable. With the SHED units you can support several cameras on one lightweight fibre cable. Allows the use of conventional single-mode fiber cable Uses common SMPTE ST 304 connectors for a hybrid link Extends manufacturer’s distance limits of the camera/CCU Supports Sony cameras Built-in optical power meter Cameras Supported: Sony 1500/1500R/2500/4300 PRODUCT MANUAL
Read more
We use cookies on our website to give you the most relevant experience by remembering your preferences and repeat visits. By clicking “Accept”, you consent to the use of ALL the cookies. However you may visit Cookie Settings to provide a controlled consent.
Cookie settingsACCEPT
Manage consent

This website uses cookies to improve your experience while you navigate through the website. Out of these cookies, the cookies that are categorized as necessary are stored on your browser as they are essential for the working of basic functionalities of the website. We also use third-party cookies that help us analyze and understand how you use this website. These cookies will be stored in your browser only with your consent. You also have the option to opt-out of these cookies. But opting out of some of these cookies may have an effect on your browsing experience.
Necessary Always Enabled
Necessary cookies are absolutely essential for the website to function properly. These cookies ensure basic functionalities and security features of the website, anonymously.
Functional
Functional cookies help to perform certain functionalities like sharing the content of the website on social media platforms, collect feedbacks, and other third-party features.
Performance
Performance cookies are used to understand and analyze the key performance indexes of the website which helps in delivering a better user experience for the visitors.
Analytics
Analytical cookies are used to understand how visitors interact with the website. These cookies help provide information on metrics the number of visitors, bounce rate, traffic source, etc.
Advertisement
Advertisement cookies are used to provide visitors with relevant ads and marketing campaigns. These cookies track visitors across websites and collect information to provide customized ads.
Others
Other uncategorized cookies are those that are being analyzed and have not been classified into a category as yet.
Save & Accept
Powered by